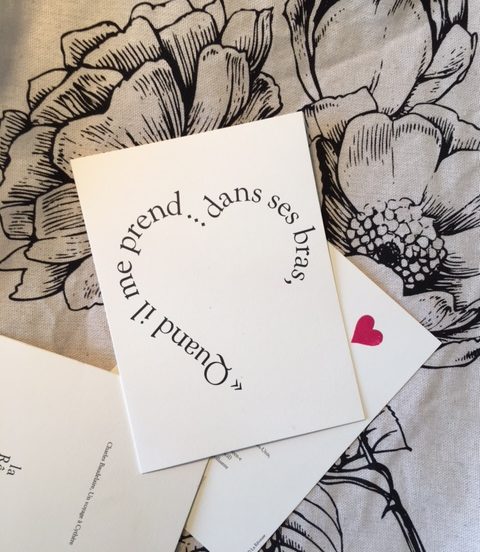 We’ve been trying hard to find great love stories with a happy ending. But we have to admit that the ones who made our Valentine Day’s reading list this year don’t really meet that criterion. So we’ve turned to French novelist André Maurois – who wrote one of the most magnificent love stories ever, Climates (Other Press) — for solace, and justification.

“The really important thing, I’ve realized in the last year, is that if we really love, we mustn’t attach too much importance to the things that the people we love do. We need them; they alone mean we can live in a particular “atmosphere” (your friend Hélène calls it’s a ‘climate’ and that’s absolutely right) that we can’t get by without. So long as we can keep them, hold on to them, good god, what does the rest matter?” Climates, by André Maurois.

Spur of the breath

Recovers the crack
Raises our earths

Stirs our ashes
Blurs our dark vaults
Proofs of Love by Andrée Chedid, translated from the French by Mary Ann Caws.

Inspired by the great tradition of French love poetry, here is a beautiful, small gift edition that is dedicated to what makes the world go round.
French Love Poems, New Directions, $11,95

Nathalie Azoulay tells us the story of a modern Bérénice, who is left by her lover Titus, over a cup of coffee, with no other explanation than the fact that Titus refuses to abandon his spouse, Roma, whom he no longer loves. More here.
Titus n’aimait pas Berenice, a novel by Nathalie Azoulay, POL

Emblems of Desire, by Maurice Sceve,

Written by the 16th Century French poet Maurice Scève, Délie, objet de plus haute vertu (1544) is a haunting and original exploration of spiritual love. Cyclical, singular, and obsessive, Délie transports the reader to a world of desperate passion and paradox, where the core theme – to suffer or not to suffer the slings of all-consuming love – incessantly returns. On a narrative level, Scève explores every possible nuance of passionate feelings and their mechanisms. On a literary level, he crafts heroic metaphors and uses sound to create complex, symmetrical, and even geometric patterns. Read more.

Emblems of Desire, selections From the Delie of Maurice Sceve, tranlated from the French by Richard Sieburth, Archipelago Books

The Happy Mariage, a novel by Tahar Ben Jelloun

In a mansion of a wealthy Casablanca neighborhood, a paralyzed painter remembers his golden year. Walled up within his illness, and desperate to break free of a deeply destructive relationship, he finds escape in writing a secret book about his hellish marriage. His wife lives in a separate wing of the house, consumed by hatred. When she finds her husband’s manuscript, she responds point by point with her own version of the facts, offering her own striking and incisive reinterpretation of their story.
Who is right and who is wrong? A thorny issue in a society where marriage remains a sacrosanct institution–but where there’s also a growing awareness of women’s rights. In their absorbing struggle, both sides of this modern marriage find out that they may not be so enlightened after all.
The Happy Mariage, Tahar Ben Jellun, translated from the French by André Naffis-Sahely, Melville House

Climates, a novel by André Maurois

Set in the heart of the Roaring Twenties in France, Climates is the account of Philippe Marcenat’s two marriages. While the first union is narrated by Philippe, the second one is told from the perspective of Isabelle, Philippe’s second wife, after her husband’s demise.
André Maurois breaks down this endless dance, step by step, with remarkable wit, insight, and, most importantly, with a troubling honesty.
Read more.

Climates, by André Maurois, translated from the French by Adriana Hunter, Other Press