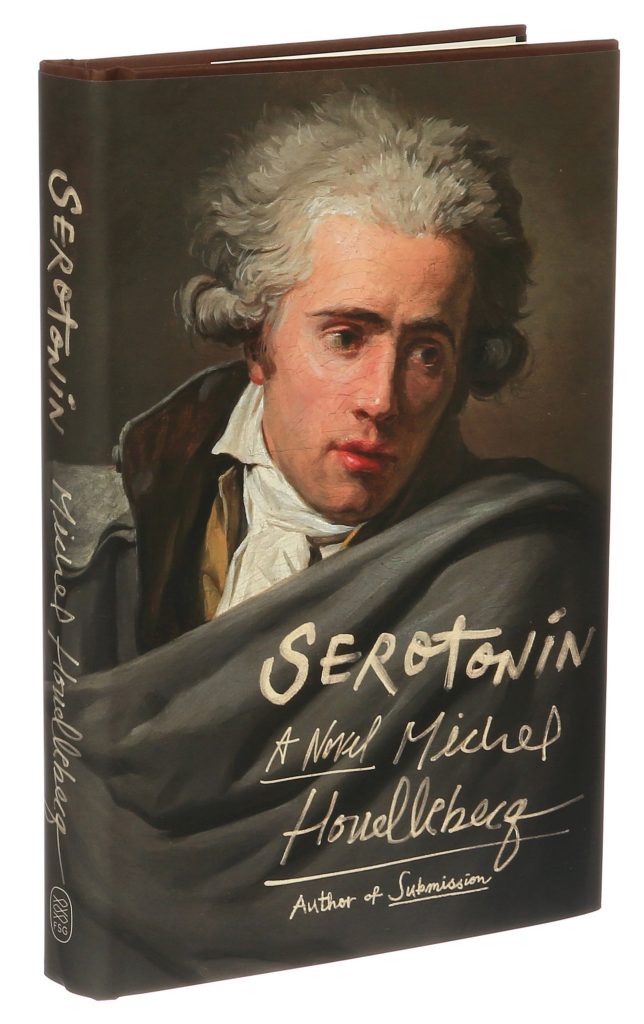 Since I pride myself on being a positive person, I will start this post on a cheerful note: isn’t it heartwarming to see that a book is at the center of a national conversation? That the power of fiction can be so strong as to dominate all print, TV, and broadcast media? That alone is enough to convince us that the novel is still in pretty good shape, and that its demise isn’t to be expected anytime soon.

But what about the novel itself? Like everyone else, I opened Serotonin with excitement and curiosity. I am a longtime Houellebecq reader and went through the novel effortlessly, experiencing alternating feelings of hilarity, offense, sympathy, disgust, and from time to time, a certain admiration– exactly when and where I was supposed to experience them. Like an obedient puppet.
Unarguably, Michel Houellebecq is a master of the art of telling a story. As a reader, you let yourself be driven wherever he wants you to go. Lulled by the author’s deadpan but bewitching voice and prankish sense of humor, you follow his (anti)-hero’s pathetic peregrinations in a depressed and almost collapsing country, interrupted here and there by overdone (and excessively cliched) memories of past (failed) romantic relationships.

So what is the problem, you might want to ask. The problem–or at least my problem–is that there is nothing new in these pages, nothing that Houellebecq hasn’t already said (on the excess of consumerism, depraved sexuality, the impossibility of love, France’s political impasse, etc.). What has indeed changed is the fact that Houellebecq seem to have given up completely on subtlety: sexual orgies now involve animals, all women are now either referred to as “sluts” or “angels”, men are either pedophiles or impotent losers. In the end, Serotonin reads like a tragi-comic farce (spoiler: it doesn’t end well). Certainly, one thing I have learned by reading Serotonin is that if politically correct motivations do not make for good literature, then this novel is a good example that anti-politically correct ones don’t either. In the end, it’s not the darkness of the novel that is problematic here but rather the lack of complexity, of profundity, and above all of ambition!

Some claim that Serotonin is a “great political novel”. I must confess that I have been more impressed lately in that area by Charles Robinson, Nicolas Mathieu, Thierry Frogier, or Edouard Louis’s work.
As for love stories, come on I mean you can’t be serious!

What can I possibly contribute to the oceans of ink that have already been spilled in praise for or in rage against this most incorrigible, uncompromising, infuriating, and brilliant author and his latest work Serotonin? Nothing that original, honestly. All I can say as a simple reader is that this is a solid installment within the author’s body of work–much better than the somewhat clumsy although occasionally outstanding Soumission and falling firmly within the literary vein established with La Carte et le territoire.

But let’s zoom out a bit. The oft-cited claim that Houellebecq is always firmly in the zeitgeist, somehow managing to invariably stay one step ahead of current events, again rings true with this novel–as many others have already written. But what has been far less discussed is just how bizarre it is that Houellebecq of all artists should have somehow found himself in this position of being at the cutting edge. Of all of the great contemporary novelists, Houellebecq is arguably the most conservative, both in language and politics: his misogyny and homophobia are unrepentant to an almost inexcusable degree; his barely concealed nostalgia for an era where humanity was bound to Church and soil is almost always on full display in his depictions of a contemporary society that has entirely degenerated into isolation and despair; and his profound nihilism and not-so-closeted wish for the modern social order to be overturned reveal very dangerous ideological bases that could very well see him walk the path of other troubled authors like Louis-Ferdinand Céline and Knut Hamsun.

So what does this imply in the end? What does it mean that this solidly conservative and author is at the cutting edge, and that he is addressing highly significant problems and subjects that most authors simply do not have the courage or talent to address intelligently? I have no idea, except for the fact that this makes Houellebecq a truly unique author in a moment in time where being unique has never been so difficult. As a result, I am sorry to say–deeply reluctant in fact–that his work is unavoidable, remarkable, and of utmost importance.