4 Books To Read on Bastille Day!

Whether you are in the mood to celebrate or mourn the day when the French citizenry stormed the Bastille (fun fact, just after the Marquis de Sade had been transferred to a different prison) and changed French society forever, you should find exactly what you are looking for below. 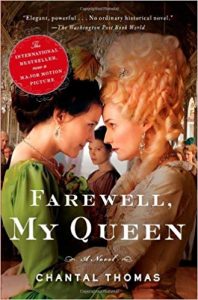 Back then, Miss Laborde was the Queen’s reader and a silent witness of the last hours of the feudal system. It all started with a vague sense of uneasiness on the morning of the 14th: the king had been awakened in the middle of the night and been told the news that the people of Paris had seized the Bastille. Later, a small group in the chateau was seen handing out tracts entitled “List of the 286 Heads That Have to Fall in Order to Effect the Necessary Reforms.” As news from the outside filtered into the insulated residents of the chateau, it was misinterpreted, played down, or denied. Thomas perfectly captures the environment of fear and panic as they very slowly spread among the court. Masterful!

Farewell My Queen by Chantal Thomas, translated from the French by Moishe Black, Atria Books 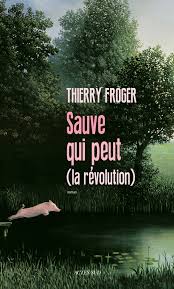 1988. Jack Lang, the French Minister of Culture at the time, calls Jean-Luc Godard and offers to finance a film that would celebrate the bicentennial anniversary of the French Revolution. Tempted by the idea, JLG starts by negotiating an extended delay so that his film –Quatre-vingt-treize et demi – can take on the still sensitive issue of the Terror, and not just the consensual overthrow of the French monarchy. Read more. 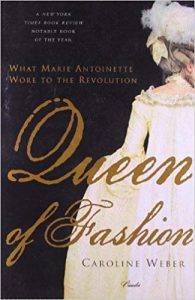 Queen of Fashion: What Marie-Antoinette Wore at The Revolutionby Caroline Weber

It’s no secret that the Albertine team is a huge fan of Caroline Weber. Her latest book, Proust’s Duchess, a 2018 Pulitzer finalist, has been on our bestseller list pretty much since its publication last summer.

With Bastille Day around the corner, it seemed obvious for us to recommend Queen of Fashion: What Marie-Antoinette Wore at The Revolution. This suspenseful and incredibly entertaining account of the role style played in Marie Antoinette’s fate and legacy is a wonderful book for anyone interested in how fashion influences and is influenced by politics.
In breezy prose, Weber walks the reader through each episode of Marie Antoinette’s life showing how what she wore opened her up to derision or praise according to how the political winds were blowing (and how a necklace that Marie Antoinette never settled her for the guillotine). Read it!

Queen of Fashion: What Marie-Antoinette wore at The Revolution by Caroline Weber, Picador 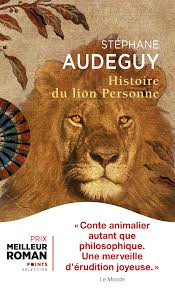 In 1788, the lion Personne (“Nobody”) made the journey from Senegal to the Royal Menagerie in Versailles (France) with an attendant and a dog named Hercule. Shortly after their arrival, the Menagerie was abandoned by its staff, and the fate of Personne was the subject of many fiery debates at the assembly. Should they kill this supreme symbol of the Royalty? Or should he be kept alive as an example and a warning to any royal pretenders? An irresistible and multi-layered portrait of revolutionary France and its colonies.