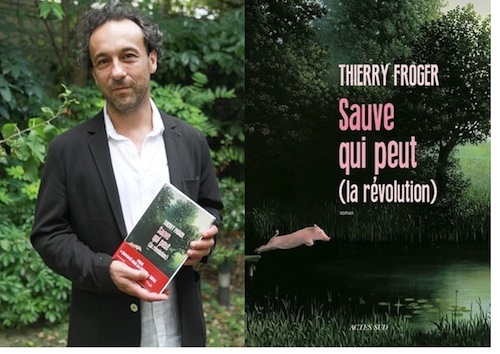 When we hear the words “debut novel”, what first comes to mind is a work that surprises our imagination and keeps us wondering how the author will develop over time. Expect nothing of the sort with Sauve qui peut (la révolution). Thierry Froger’s joyful erudition, his powerful and assured voice, as well as his witty and elegant sense of humor, make his debut stand out as one of the best novels of the fall.

1988. Jack Lang, the French Minister of Culture at the time, calls Jean-Luc Godard and offers to finance a film that would celebrate the bicentennial anniversary of the French Revolution. Tempted by the idea, JLG starts by negotiating an extended delay so that his film –Quatre-vingt-treize et demi – can take on the still sensitive issue of the Terror, and not just the consensual overthrow of the French monarchy.

While working on this new project, JLG feels the need to visit the historian Jacques Pierre–a longtime friend from their shared revolutionary (Maoist) past who is now living off the shore of the Loire with his beautiful teenager daughter, Rose. As it turns out, Jacques is writing a book on Danton.

Constructed like Russian dolls, Sauve qui peut… also contains a second narrative that takes place in 1793 and focuses on Danton. Within this sub-plot, Danton has been resurrected after his execution at the guillotine, and has found temporary refuge on an island in the Loire river with his teenage spouse. It soon becomes very clear that this second story is none other than Jacques’s novel.

Sauve qui peut… is a riveting portrait of these aging revolutionaries, a brilliant historical novel that questions the art of storytelling, and a work that will leave you wondering whether our society needs to commemorate this founding event or engage in a new revolution. This is not just an excellent debut novel, it is an excellent novel, period. A work that proves that one can be wildly ambitious and devastatingly entertaining at the same time!