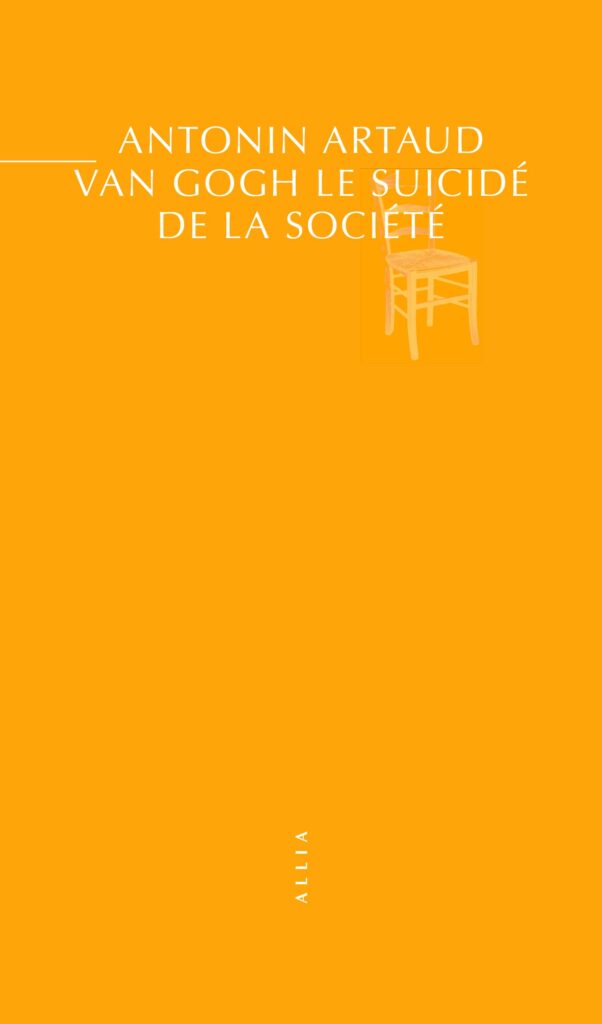 I first became aware of Antonin Artaud’s exceptional, radical, and unique essay Van Gogh Le Suicidé de la société thanks to Deleuze & Guattari, who often referred to it in their work. These two thinkers considered the story of Artaud to be a prime example of how society rejects free spirits and those who do not adapt themselves to dominant modes of thought and expression, of how the seers and visionaries among us are often labelled as mad because their liberty reflects our own confinement. Artaud more than any artist in the twentieth century embodied this: institutionalized off and on throughout his life, a drug addict ceaselessly moving from one place to the next, his life in itself was a searing indictment of the bourgeois values of the time–for which he suffered the consequences of poverty, rejection, and isolation.

Thus it is no surprise that Artaud found kinship in the figure of Vincent Van Gogh, whose tortured life and exceptional talents mirrored his own. Outraged at the French psychiatrist François-Joachim Beer’s public assessment of Van Gogh as a madman during a retrospective exhibit of his work in 1947, Artaud–who himself had just been released from an asylum–decided to write a defense of the great artist that placed the blame for Van Gogh’s actions and death squarely upon a society that had turned its back on him because of his unique vision of the world. This poem/essay, whose rich and beautiful language is matched only by its own righteous rage towards society, contains reflections on well-known paintings by Van Gogh, several brief analyses of the artist’s exceptional letters (which are a body of work unto themselves), and descriptions of the author’s own experiences with mental disturbance.

Among Artaud’s remarkable visions of Van Gogh’s work, I found this to be particularly arresting:

“Beware of the beautiful landscapes of

It is health between two bouts of

hot fever that will pass.

It is fever between two bouts of a

One day the armed painting of Van Gogh

from fever and good health,

will return to throw in the air the dust of

a caged world that its heart could no

As the hordes descend on the immersive Van Gogh exhibit arriving here in New York, this observation (and the book as a whole) serve as reminders of the danger lurking in Van Gogh’s work–of how what is depicted in his paintings stems not from a simple appreciation of the world’s beauty but rather the aesthetic reification of complex and troubling emotions elicited by the rejection and abuse that the great artist suffered. No one but Artaud could have felt this precise sensation as clearly as Van Gogh did; and as a result, no else could have written such a remarkable artistic commentary on the subject.