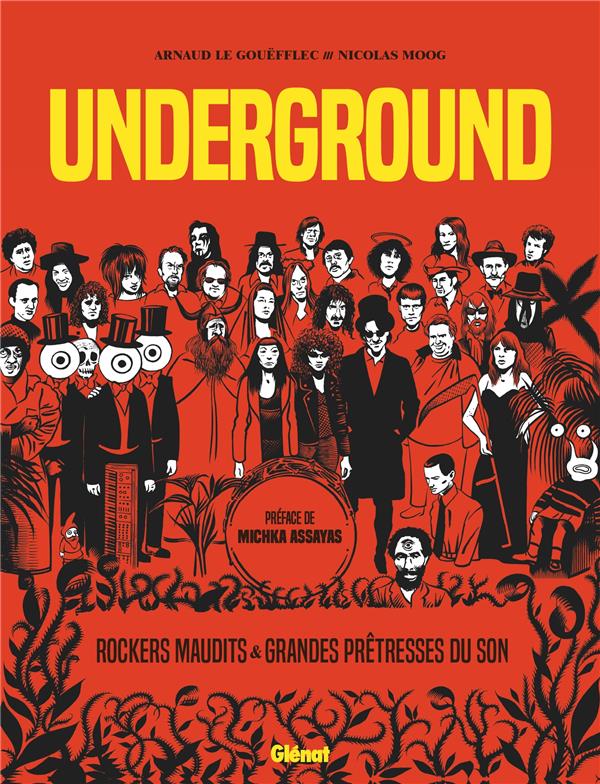 This one is for the music nerds out there! I know there might be one or two of you reading this. Or not, no matter. Pop music writing is a mixed bag: either hilariously academic or blindingly dumb, the line between Adorno and Spin magazine is a treacherous one to walk. With occasional exceptions (ahem Lester Bangs, cough Greil Marcus, sneeze Legs McNeil), it is mostly just worth passing by.

But two vinyl junkies in France may have figured out that the best medium to present pop music is not the article, the review, the essay, or the fluff piece. No, their answer to the riddle of writing about something as self-consciously and openly un-academic as pop music is that it should not be done within the confines of pure elitist text but rather within the open borders of the bande dessinée. To prove their point, these two headphone highbrows Arnaud Le Gouëfflec and Nicolas Moog have published an engaging and informative survey of independent and experimental music fittingly entitled Underground–with delightful illustrations to boot.

Presented as a series of biographical portraits of often underappreciated artists (whether or not this is a blatant rip-off of Penelope Bagieu’s Les Culottées is another subject of conversation; although as this book focuses on pop culture, which is built on stealing other people’s ideas and presenting them as your own, it may be an unintentionally profound reflection on its very nature), this book is a crash course in all of the music to which casual listeners may not have listened, sometimes with good reason. From Moondog to Daniel Johnston to Éliane Radigue to The Cramps, the stories of these influential artists with fan bases in the dozens would have made you want to raid your local record store back in 1995. Here in whatever year we are in now, I am sure you can find them somewhere on the interweb.

This book is a gem for anyone who appreciates unusual music and will nourish the eyes and ears of those with a taste for the off-kilter. Honestly, the list of essential albums at the end is worth the price of admission in itself! So turn on, tune in, and get yourself a vintage hi-fi to accompany the treasures mentioned in this charming compendium.