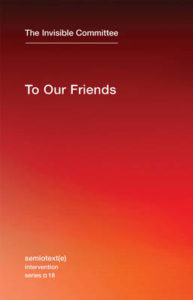 This book will seem, to most readers, at first glance, to be an anarchist manifesto. And while there is a certain amount of insurrectionist language, what this book is most valuable for is the incredibly precise way in which it aims to change the discussion and perception of power and government at its most basic level. What is the basis of power? Why do we believe so strongly in the need for a government? The Invisible Committee address these questions and many more with a lucidity and conviction that is decidedly lacking in today’s mainstream political discussion. Read this not to be inspired to revolt, but for the much-needed exploration of the nature of power and government in today’s world.