The Way of The World 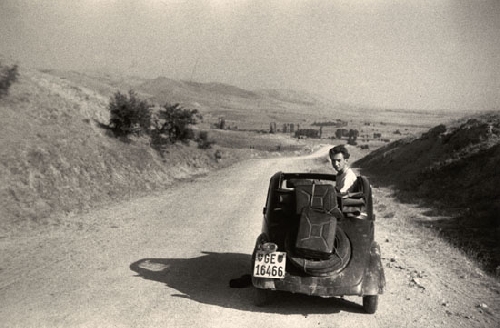 Like most high school ne’er do wells, I developed a rather sturdy On the Road obsession that lasted until the ripe age of 19. Coming out of the sticky, alcoholic embrace of Kerouac, I realized that—despite their enormous cultural influence and their occasionally wonderful moments—his books had many disturbing and self-obsessed qualities that I could not stomach anymore. The days of the macho dharma bums were gone for me, and I needed something to fill the void.
Some years later, I discovered The Way of the World by Nicolas Bouvier. And after having devoured it, my need for travel literature was forever satisfied. More graceful than Bruce Chatwin, less needlessly over-intellectualized than Patrick Leigh Fermor, The Way of the World is the remarkable story of two young men driving from Geneva to India in a barely functional Fiat. They get stranded in storms. They get lost regularly. At one point, they are so poor that they beg the local government to sleep in the municipal jail—which results in them being imprisoned for a month. All of this is told in magnificent, impressionistic detail that leaves the reader with vivid images of the gypsy camps in Yugoslavia, of the mud-soaked bazaars in Kurdistan, of the universal obsession with poetry in Iran, of the remarkable beauty of Afghanistan.
There is no better travel book. This, my friends, is it.

The Way of the World, by Nicolas Bouvier, introduction by Patrick Leigh Fermor, illustrated by Thierry Vernet, translated by Robyn Marsack, New York Review of Books