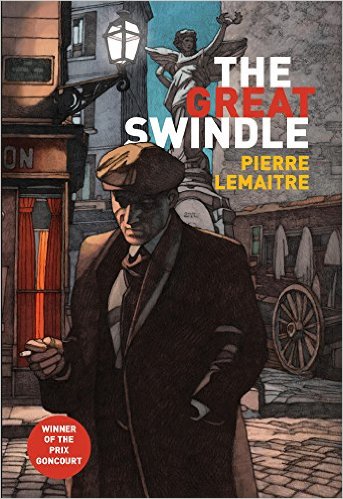 Like thousands of ‘beaten faces’ – the name given to soldiers who fought in WWI –Albert, a shy and modest accountant, and Edouard, an unloved Daddy’s boy, struggle as they attempt to reintegrate into civil life in a country that seems to have quickly forgotten the sacrifices they made in its name. They develop a scheme as immoral as it is lucrative: take advantage of national pride by promising to build monuments and disappearing with the payments. The Great Swindle is a powerful, violent novel that explores the dark time immediately following WWI; a period dominated by cynicism, embitterment, and lack of trust.

Lemaitre’s style is crystal clear and straightforward like an uppercut. The Swindle has nothing to envy from masterworks like Feu (Fire) by Henri Barbusse, or La Peur (Fear) by Gabriel Chevalier.

The Great Swindle, a novel by Pierre Lemaitre, translated from the French by Frank Wynne