The Bridgetower Sonata by Emmanuel Dongala 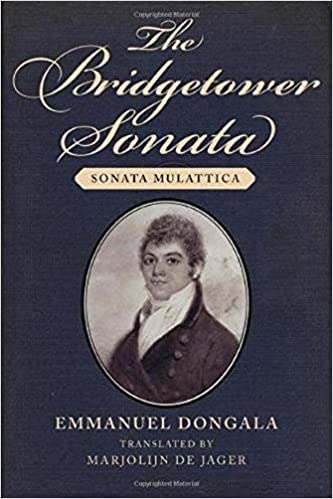 The life of Emmanuel Dongala is itself already a novel. Born in the Central African Republic, he pursued his scientific studies in Paris and New York in the 1960s, where he actively protested for civil rights and was also taken by a passion for jazz (as his exceptional collection of short stories Jazz and Palm Wine so clearly shows). A professor of chemistry in the Congo, he fled to the forest with his family when the war of independence began. There in the jungle, a happy emissary found him to give him a visa for the United States which had been obtained thanks to the relentless efforts of none other than Philip Roth. He obtained a teaching post at Bard College and taught there for almost 30 years while, much to our luck, writing wonderful books.

Inspired by the music and complex history of the Congo, dictatorship, and the fate of women, his body of work is as powerful as it is varied, which includes Johnny Mad Dog as well as his most recent translated work The Bridgetower Sonata.

April 1789, a few months before the Revolution, Frederick de Augustus–the son of a freed black slave–and his 9-year-old so Georges Bridgetower arrive in Paris to perform at the Palais des Tuileries. The concert is a great success and Bridgetower’s career is launched, with the most fashionable salons opening their doors to him. As the music critic of Mercure de France highlights, the talent of this young violinist teaches a lesson to those philosophers who doubt the ability of people of color to distinguish themselves in the arts.

Augustus, who wants his son to have the same destiny as that which young Mozart had, is deeply satisfied. But the French Revolution erupts, father and son flee to England where Georges becomes the protégé of the Prince of Wales before moving to Vienna and becoming friends with Beethoven. And thus the “Sonata Mulattica” that is better known as the Kreutzer Sonata comes about.

Reading The Bridgetower Sonata will plunge you head-first into a fascinating time in history. On the one hand, there are three geniuses who will go on to define the canon of classical music–Haydn, Mozart, and Beethoven; and on the other, there is the fight for liberty, the cradle of today’s society, as well as the emergence of the feminist struggle with Olympe de Gouge. A terrific historical novel, as well as an impressive coming-of-age story, The Bridgetower Sonata embraces the history of music, slavery, and the black condition at the turn of the 19th century. We cross paths with Alexandre Dumas, Pierre de Condorcet, Le Chevalier St George, Marie-Antoinette, and Voltaire as well.

With his multiple storytelling talents and his sharp intelligence, Emmanuel Dongala brings us a subtle and profound portrait of Europe at the time of the Enlightenment, a Europe that already bears many of the tensions that define it today.

The Bridgetower Sonata, a novel by Emmanuel Dongala, translated from the French by Marjolijn de Jager, Schaffner Press