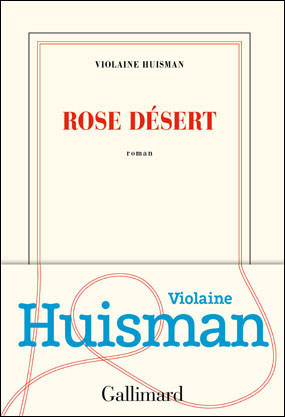 At first glance, Rose désert, Violaine Huisman’s second novel might seem like a piece of travel writing—a long trek that leads her from Morocco to Senegal after the end of a relationship. If Violaine knows what her destination is, she still has no idea where she is headed. The narrative of the different encounters that come to pass as the journey progresses is interlaced with flashbacks of the narrator’s passionate love story, one that is both formative and destructive.

The intensity, the violence, and the eroticism of the remembered scenes erupt within a lethargic suspended time inherent to travel. This time of inner self-confrontation also allows for a second voice to enter the narrative: as she travels into unknown lands, a return to a past that the narrator cannot undo imposes itself, a time dominated by her mother—both magnificent and alienating—and the shadow of her absent father.
This past that the narrator tried to escape by coming to New York but which never stopped implicating itself in her relationships with men comes back to haunt her again once in Africa and its arid but maternal land. Her salvation ultimately comes in the form of the books that she takes everywhere with her. In reading and then in writing, Violaine finds the potential of reconstruction, like the pieces of a puzzle that finally come together.
While reading Rose désert, I thought of the following sentence by Emmanuel Carrrère in Retour à Kotelnich: note d’intention: “To seize fragments of reality while being swept forward by what comes and then to discover what these fragments relate: this is what drives me.” To which I would add, “Much to the reader’s delight”, when it comes to both Huisman and Carrère.