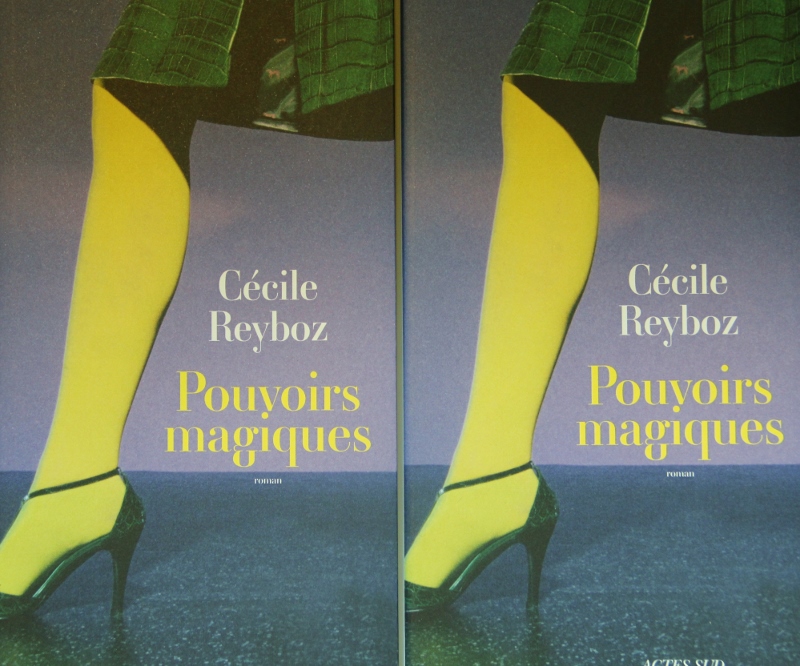 Pouvoirs magiques, Cécile Reyboz’s third novel, is not a book you’ll want to share with everyone. You can picture friends who’ll say, “Seriously? You? You liked that book?” their voices raising with indignation. No. Pouvoirs magiques is definitely not for them. You will, however, want to offer it to your “tribe,” just to tell them how important they are, no matter the quarrels, the hurts, the deceptions, and all the ludicrousness. You won’t find a better way to tell them that you’re happy they’ve been around, even in their own imperfect manner, all these years. So what is Pouvoir Magiques about?The novel focuses on the story of Cécile and her family. Since her childhood, Cécile has been certain that she is blessed with an intimate knowledge of the world, including its invisible but nonetheless essential components. “But as we share our lives with individuals who accommodate themselves with no more than ‘handy’ words and gestures, with superficial landscapes where all the things they knew before have gone missing, it becomes difficult, almost impossible, to keep up with our original level of knowledge,” notes Cécile.The strength and happiness that shine throughout the book originate in Cécile’s acute “consciousness of the world.” Cécile, though, is no fool: she doesn’t ignore that she was born from a hurt, wounded, lop-sided love, the child of a second chance. As opposed to Catherine, Cécile’s eldest sister. Catherine was the child of perfect happiness; the beautiful and impassive Catherine, about whom Cécile can’t help but wish that she would be a little less distant and a little more spontaneous and warm. As a matter of fact, Cécile’s childhood companion wasn’t Catherine but François, her good natured and loving father. Excessively loving perhaps. Cécile keeps her distance from her mother, Juliane, whose main duty is “to make the family,” maybe because it helped her ignore her husband’s many infidelities. At the time, it’s what women were expected to do.“On TV, Anne-Aymone Giscard d’Estaing, Danièle Mitterrand, smile and remain silent. Later on, Bernadette Chirac, Hillary Clinton, smile and remain silent. They greet crowds, and remain silent. They pronounce official speeches, and remain silent.And Françoise Hardy, Laetitia H., Jane Birkin, and the Queen Sofia from Spain: they all sign autographs, pose in front of cameras, and sing, but they remain silent.Then women from Europe and America look at their reflection in the mirror, and make a decision according to what they see: some of them will be Marilyn, curvy and sweet, but whistled at, mocked, and nonetheless desired. The others will be Signoret, beautiful and dignified, respected, cultivated, but cheated on, and no one will ever dare to fool around on them.No one decided to be an uncompromised Signoret, loved AND tugged, cultivated AND curvy AND who would leave at the slightest mistake, without any negotiations or compromises. Almost no one will dare. Or those who will are too seldom to be mentioned. The few who try, though, provoke shrugs, and are called ‘hysterical,’ ‘suffragette,’ ‘painful,’ ‘intransigent.’”Pouvoirs magiques is less interested in the story of a family than in following trajectories of a handful of characters, as the narrative moves progressively from the aftermath of WWII to today. With her attention fixed on the daily lives of three different generations, Cécile captures the passage of time and the changes from one era to another.  She traces the hope that followed the end of WWII, the refreshing liberty that blew through the 70s, the race to success that raged in the 90s, and the subsequent slow decline and wave of confusion.

Cécile Reyboz writes like some draw, her words are sharp, her energy suffuses the pages. In a few lines, she brings to life vivid characters. She nails down their language habits, their movements, their hidden comic talents, whatever it is that makes them unique. As you reach the last paragraph of the novel, you’ll find yourself whispering, all smiles and teary eyes: “Cécile, what an ace!”