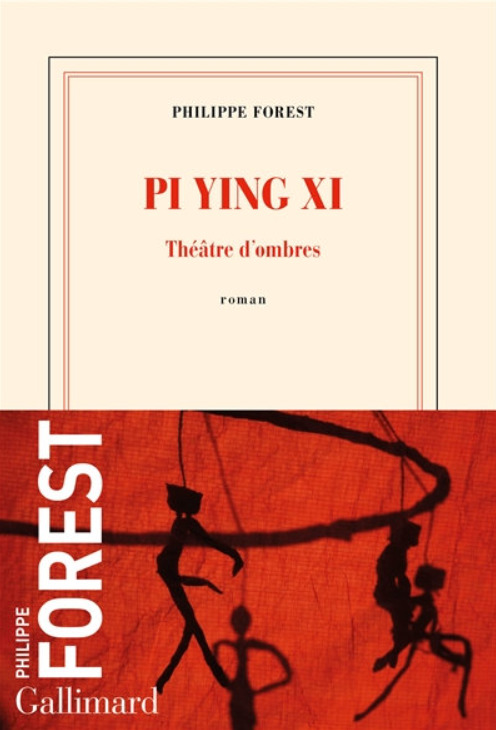 “Whether I am at home or on the other side of the world, I can’t help but imagine that there might be something to discover that relates, in some ways, to my own life, and which might, if I understand it, reveal its meaning to me.”

This exquisitely convoluted sentence may stress what is at the heart of Philippe Forest’s superb new novel Pi Ying Xi (Gallimard). At the end of a meal, taken alone in one of those ordinary Chinese restaurant for which the XIII arrondissement of Paris has become famous, the author discovers an arresting message in a fortune cookie: “Help, I am held prisoner in Chinatown.” And with this, he introduces us to his winding relationship to China, a country that he claims to ignore. We recommend that you refrain from taking these words at face value though; “ignorance” like “knowledge” are quite relative, as will be proven later by Forest’s profound and extensive knowledge of Chinese literature and culture.

“To not know a country is maybe the best way to understand it. If by understanding, we mean to let go of any preconceived notions and abandon ourselves to a dream to which reality invites us and that will give it its most realistic appearance – the only one that matters, at least to oneself.”

In China, Forest’s novels have been both publicly and critically acclaimed, and our author has been invited there on many occasions to come and teach at several prestigious universities. What motivated him each time to discover the work of China’s greatest writers and thinkers? What was the nature of his connection to this vast ancestral and endlessly fascinating culture? Forest never really answers the question, and never stops pursuing it at the same time. And what results is a most graceful – and delightfully slow-paced – investigation. For our greatest pleasure, Forest guides us through memories of his travels and intense and prolific readings of Chinese writers and expert sinologists, in search of what may cast an explanatory light on his elective affinities with China.

“That there may not be any secret to uncover in China, I am inclined to acknowledge. That the solution to the problem one calls existence is nowhere to be found, I’m also not far from believing. But then, it is the secret of this absence, the absence of this secret that one starts looking for.”

Pi Ying Xi is an invitation to discover a succession of literary masterpieces that bear in their heart the experience of loss and mourning. With patience and subtlety, Forest builds his novel like a magnificent shadow play, an altar devoted to the memory of his deceased daughter, and to what has kept him alive ever since: reading and writing.