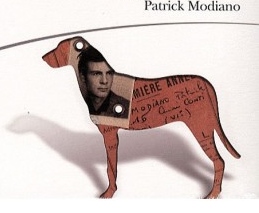 Pedigree holds a singular place among Modiano’s work. While his novels can be read as an attempt to save names, people, and stories from a “coating of oblivion” in an attempt to capture fragments of the past, mysterious traces, and elusive human destinies, Pedigree offers a very factual, straightforward account of his “roman des origines” (to quote Marthe Robert). Its title  is a reference to Simenon’s eponymous memoir, and the text delves into the life of Modiano’s parents in the years that preceded his birth, a time known as the years of the Occupation. In the speech he gave at Stockholm, while receiving the Nobel Prize for literature in 2014, Modiano said that those who have lived through these times were eager to forget everything about it, and that if they do remember anything, it’s only the mundane details of daily life, the details that comfort them with the idea that life, after all, was not that different than the one they had before. According to Modiano, their description of these days sound like bad dreams, infused with a vague remorse of being among the survivors. And when, later on, their own children questioned them about the Paris of these years, their answers remained hazy. “But in the face of our parents’ silence, we had to guess everything, as if we had gone through it,” claimed the novelist.At the center of Pedigree is the mysterious figure of Modiano’s father: “He had never told me what he had felt, deep inside, in Paris during that period. Fear? The strange sensation of being hunted simply because someone had classified him as a specific type of prey, when he himself didn’t really know what he was? But one shouldn’t speak for others and I’ve been reticent about breaking silences even when they do you harm.” His mother, unloving and unkind, remains at the outskirts of the text: “I seldom saw her. I can’t recall a single act of genuine warmth or protectiveness from her. I was always on my guard around her.”As Modiano collects facts about his past in the clear and sober style that has become his trademark, it becomes impossible not to notice the contrast between the simplicity of his sentences, and the strength of the emotion that they trigger in us. Nostalgia is missing from the text, and instead, a remote and almost silent pain is brought to the surface.“Apart from my brother, Rudy, his death, I don’t believe that anything I’ll relate here truly matters to me. I’m writing these pages the way one compiles a report or resume, as documentation and to have done with a life that wasn’t my own. It’s just a simple film of deeds and facts. I have nothing to confess or elucidate and I have no interest in soul-searching or self-reflection. On the contrary, the more obscure and mysterious things remained, the more interesting I found them. I even looked for mystery where there was none. I lived through the events I’m recounting, up to the age of twenty-one, as if against a transparency – like in a cinematic process shot, when landscapes slide by in the background while the actors stand in place on a sound-stage. I’d like to translate this impression, which many others have felt before me: everything paraded by like of a transparency and I could not yet live my life.”Pedigree, a memoir by Patrick Modiano, translated from the French by Mark Polizzotti, Yale University Press, a Margellos World Republic of Letters Book