2018 Prix Goncourt Laureate: And Their Children After Them 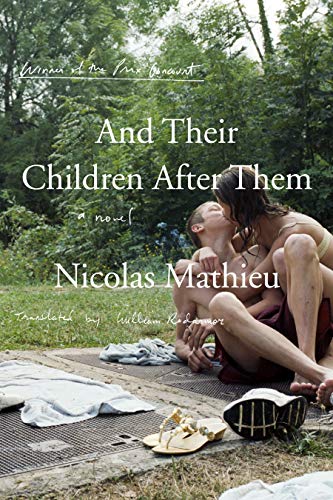 Right on time for the long, lazy summer days, And Their Children After Them, Nicolas Mathieu’s Prix Goncourt winning novel has just landed in the country’s best bookstores in a translation by William Rodarmor.

And Their Children After Them takes place in a part of France that is not often spoken of, as it lacks the splendor of historical cities, the charm of the South, and on the opposite side of the spectrum: the tension and drama of the ‘banlieues’ (suburbs). Mathieu chose to set his second novel in Lorraine, (North East of France), a region that was once the industrial heart of the country, where work has become sparse after the closure of factories. Helliange is a mid-size city (on a French scale), with its endless lines of prefabricated houses in upper-middle-class neighborhoods, and its cultural void. A city identical to many.

Over the course of four summers during the 1990’s, we follow three teenagers — Anthony, Hacine and Steph — and their friends and families, as their lives intersect before drifting apart upon entering adulthood. Somehow, the summer season always exacerbates the boredom that pervades these places, and the yearning to move out is never as prevalent among the youth as during these months.
And Their Children After Them is an ambitious bildungsroman that reveals through the failures and successes of these three characters the many frontlines where French society is failing its own citizens.

Mathieu writes with insight and authority about a world that he knows inside out, a world where transportation is key. It’s no coincidence that the theft of a motorcycle is at the heart of the story: in these places, without a vehicle, you’re stuck with no hope to be part of the good life that’s happening far away.

A choral novel that covers many grounds, And their children after them is first and foremost a spectacular portrait of teenage years. Mathieu is a subtle observer who seems to effortlessly get under his characters’ skin, skillfully revealing their vulnerabilities, fears, hopes and losses.
When Anthony falls in love, all Mathieu needs is four short sentences to convince us that Anthony’s life is forever changed:
“Stéphanie was already like those jiggles that got stuck in your head and drive you crazy. Anthony’s life had been turned upside down. Nothing had moved and nothing was where it used to be. He was suffering; it felt good.”

A few chapters in, Mathieu gives a description of Anthony’s despair that will resonate with anyone capable of remembering their teen years.
“It would never end, this feeling of being under people’s thumb, being young and having to account for himself. At times, he felt so bad, he started getting desperate ideas. In movies, people had symmetrical faces, clothes that fit, and means of locomotion. Usually. Whereas he lived by default, flunking school, getting around on foot, hopeless with girls, and he couldn’t even keep it together.”

And here’s his take on the nostalgia of the successful middle-aged men:
“These men who had won it all now realized that the only thing that mattered was the beginning.”
Not only does Mathieu’s dialogue ring impeccably true, but from page one, the reader feels that the human heart has no secrets that can escape Mathieu’s notice.

However, it may be the ellipses that punctuate the narrative that I prefer most. Where some writers might have been tempted to detail their characters’ routine year after year, Mathieu wisely chooses to create pauses in his narrative that resume at the early stages of the following summer.
As Anthony grows out of adolescence, these ellipses gracefully underline the passage of time, the absence of change, and the results of social reproduction — where the have-nots keep on going with their frustrations and disenchanted lives, while those that have everything pass on their privileges to their offspring while reveling in their pride at living in a country where everyone has a chance to succeed.

Just like Edouard Louis, Nicolas Mathieu is a legitimate heir to Pierre Bourdieu, Annie Ernaux, and Jean-Philippe Manchette. But there is much more to the novel than its social and political views.

And Their children after them is one of those novels where the protagonists become dear friends whom you feel sorry to leave on the last page. Readers born in the 70s or before, be aware of powerful “madeleine’ effects: scenes at a 14 of July ball, or flirty conversation under a starry sky, are very likely to bring back deliciously painful memories of a youth that refuses to die.