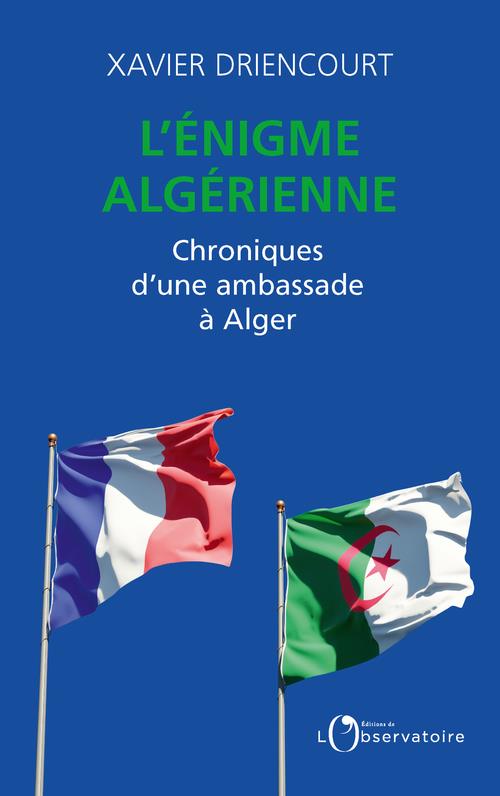 In L’énigme algérienne, Xavier Driencourt, the French diplomat who stayed in Algeria for the longest time, offers a precise, sharp, and clever analysis of the complex French-Algerian diplomatic and political relations.

L’énigme algérienne reflects on Driencourt’s two experiences as French Ambassador in Algeria, from 2008 to 2012, then on his second mandate from 2017 to 2020. He collaborated with several French presidents and witnessed the fall of Bouteflika and the first Hirak demonstrations. Driencourt provides us with his analysis of the issues that make the relations between the two countries so tricky. He explores the topics of memory, immigration, and what the Algerian people call “the System” – so many subjects that make France and Algeria interconnected and dependent on one another.

Driencourt provides us with his views on the French attitude towards their Algerian counterparts, the mistakes that France made, starting with colonization, and the progress that has occurred throughout time. He describes the resentment and the ambiguous relationship between the Algerian society and its former colonizer, along with a very high demand for French visas.
The reader gets a clear view of the challenges a French diplomat, especially an ambassador, must face while on duty in Algeria. He mentions, to give you an example, that there is a widely spread belief in the country that the French Ministry of Foreign Affairs, alongside the French Secret Services and the Embassy, are the ones who control the Algerian decisional sphere.

L’énigme algérienne is not about a French diplomat complaining about a country he dislikes; it is quite the opposite. Driencourt has an excellent understanding of the issue of memories that dates back to the colonization era and the Algerian war. He knows that some wounds are long to heal if they can be healed at all.