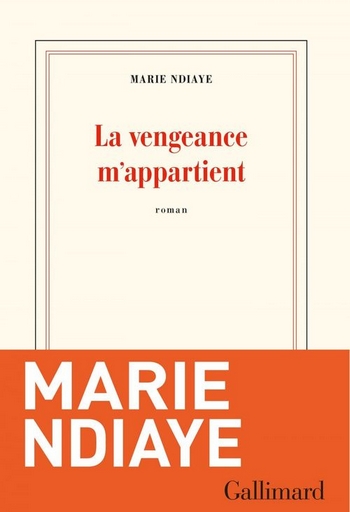 There are novels that we read for pleasure, almost without even realizing we are reading them–stories in which we find a vague echo of our everyday lives, our past, and the times around us. Books that gently shake us but while always giving us a flattering reflection of ourselves. Reading a novel by Marie NDiaye is an entirely other experience; and her last work, La vengeance m’appartient is a clear reminder of this.

Ms. Suzanne, a lawyer in Bordeaux, single, is the pride of her parents who are retired municipal employees. To the point where she does not dare to confess that her professional success is far from being as exceptional as they imagine it to be; and that she always carefully parks her car far from their neighborhood when she visits them so that her old car does not show her modest financial situation. The course of this gray and sad life full of bitterness, guilt, and rancor is interrupted when Gilles Principaux arrives at her office to ask her to represent his wife–who has just murdered their three children.

Ms. Suzanne’s life is shaken and she falls prey to all sorts of questions that become more and more urgent and harrowing as the narrative progresses: who is this Gilles Principaux? Is he the boy with whom she experienced something as an adolescent that was as significant as it was mysterious and which she can barely reconstruct in her mind? Why has he chosen her, a lawyer with a mediocre reputation, for such a momentous trial?

Faithful to her style, Marie NDiaye asks more questions than she answers throughout the story, with the mystery enveloping the characters thickening and revealing only their growing complexity. Marie NDiaye has followed the lesson of Marguerite Duras: it is not a matter of explaining, of psychologizing, but of “plunging into the shadows and describing them from within” as Philippe Lançon said so well.
We finish these pages mesmerized and bewitched by these portraits of women who have been crushed by an adversity to which we could give many names and against which they resist with all their strength.