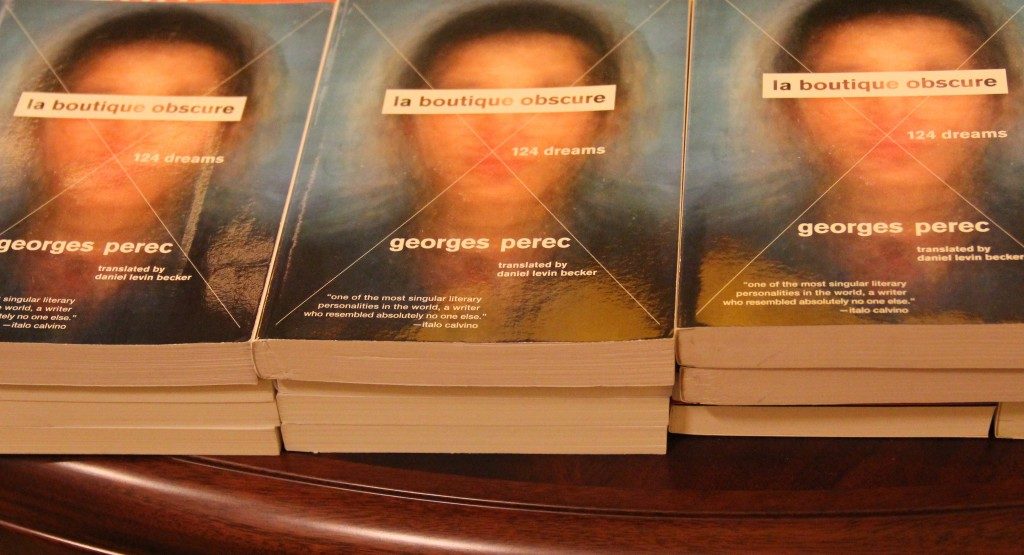 At first glance, La Boutique Obscure may appear like a singular and intriguing exception, within the work of Georges Perec, a work usually placed under the sign of his passion for systems and constraint writing. In this volume, Perec records his dreams in chronological order. This night journal, written between 1968 and 1973, offers a fascinating foray into the author’s subconscious.

At the time, Perec had just broken up with Suzanne Lipinska –a break-up which involved a painful separation from Le Moulin d’Andé (The Mill at Andé), an artist colony created by Suzanne in 1957 where Perec had sought refuge from Paris for extended periods of time. In order to keep a looming depression at bay, Perec started meticulously documenting his dreams.

As the diary proceeds through the years, these narratives – at first short, haunting and enigmatic – progressively turn into extremely coherent and well-articulated plots. Perec himself admitted to have eventually tamed the wild nature of his dreams into “a memorial album, pretty like a theatrical program, with advertisements at the end.”

Readers will rejoice in his irresistible sense of humor: in one dream, Perec is correcting the galleys of The Void, and, to his complete astonishment, he sees hordes of “e”, figuratively jumping from one page to the next. In another, he kills his wife and advertises her body as “quality meat”.

But La Boutique Obscure also lets us feel the intensity of the author’s sadness and vulnerability. This collection opens and closes with two dreams set in concentration camps, where Perec’s parents were murdered. As a matter of fact, while recording his dreams, Perec was also working on W, Memory of Childhood, to be published in 1975.