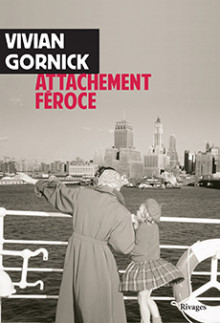 Some books have the same effect on you that strong alcohol does: they shake you to the core, electrify you, and leave you with a deeper understanding of yourself–more aware of your connection to the world. This is exactly the effect of Fierce Attachments.

Fierce attachments tells us about how Gornick became the woman she is now–how she developed into a feminist and a writer thanks to the unintentional combined influence of her mother and Nettie, her mother’s neighbor and closest friend.

the narrative alternates Gornick’s memories from her childhood, adolescence, and early adulthood, with more recent conversations she had with her mother as they walk the streets of New York side by side. On those walks, Gornick’s mother is irresistibly funny and warm, a complete contrast with the neurotic, manipulative and self-pitying woman who reigned over the author’s childhood.
Gornick’s memoir brings back to life the kitchens of her Bronx tenement, these rooms that were exclusively female territory, where politics – they were all communists – met deeply rooted superstition, forming a unique and unexpected composition. As Gornick confides in an interview to the Rumpus:
“My mother lost her husband and became Anna Karenina – she went down on the sofa and suffered – and the other one, Nettie, became the whore of Babylon. From them I learned that a man was the most important thing in life and if you lost one you were a moron. If you did not get one, you were stupid and lost and you were inept. I came of course to resent that as I got older and I was an incipient feminist. I had ambitions for myself and I came to hate them both for this.”
Her memoir manages to go far beyond her own existence, mining the material of her life to tell a story that is also cultural and political – that of working-class kids, the first generation in their family to get a college education. But Fierce attachments remains first and foremost a vibrant and superb love letter to Gornick’s mother.
Fierce Attachments (Attachements Féroces) by Vivian Gornick, trans. by Laetitia Devaux, Rivages Poche)