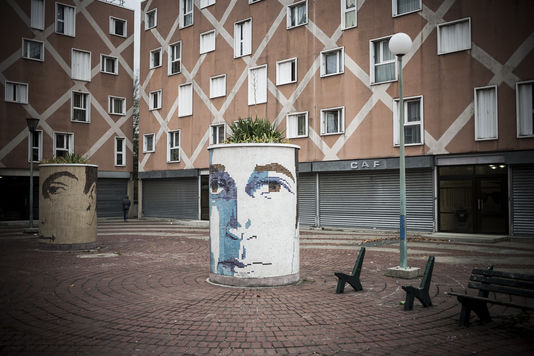 Fabrication de la guerre civile is an ambitious, epic, utterly addictive, and brilliant novel. Its subject poignantly resonates today, with all that we’ve been talking about since Charlie Hebdo’s attack: the divide of French society, the resignation of politics, the triumph of individualism, the drug business (“biz”), and the lies of a republican state supposedly offering equal chance of success to its citizens.

Under the pen of Charles Robinson, the France’s divide is not only understood sociologically and geographically, but is, first and foremost, inscribed in the language. The confrontation of the controlled, low-key, neutral, understated, tongue of politics, and the flamboyant, inventive, bloody one of the Cité repeatedly shape the novel.

Fabrication de la guerre civile takes place in La Cité des Pigeonniers, an area of housing projects that have accommodated North African families since the 70s, and which have been completely abandoned to unemployment, solitude, drugs, and gangsters.

With the real estate boom – and the gentrification of what used to be lower middle-class neighborhoods in Paris – promotors show a renewed interest in the suburbs. Well aware that they would never be able to make any profits in La Cité des Pigeonniers so long as their historical tenants are still inside, they decide to erase La Cité, and construct in its place new comfy buildings. As a result, the current inhabitants have to move. Charles Robinson gives us a stunning and lively portrait of a community on the edge of destruction, and follows each protagonist, as their life is about to change.

The title of the novel leaves us with little hope for a happy ending. Why would it? The characters know very well that they are not welcome beyond the limits of la Cité. “We were the No Future generation. But that was before, coz now, we have no present either”. Their best shot remains a perpetually mediocre life subsisting on food stamps and state support. But the unforgettable protagonists of Fabrication aren’t – for all their share of misery – an never-ending string of tearing victims. Far from it. And that is part of the author’s genius: he stands clear of clichés and oversimplifications at all times. His protagonists have perfectly assimilated the rules of free market and they reproduce these rules inside the project, trying to maximize any profits, and exploiding each other as much as they can.

Robinson’s writing has nothing to envy in relation to Queneau’s Zazie in the metro : it perfectly seizes the flavor, the imagination, the energy, the rage, the humor with which the youth of the suburbs re-invent French language. Definitely one of the best French novels published this year!