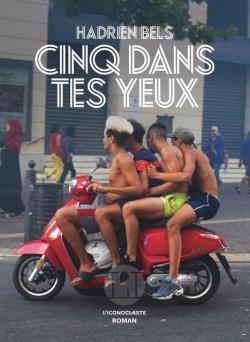 In 1995, when promoting Total Khéops (Europa Books) Jean-Claude Izzo said: “Marseille is the only city on earth where you can show up for the very first time, penniless and with just a suitcase and yet claim: I am home”. 25 years later, Hadrien Bels’s debut novel, Cinq dans tes yeux, comes as a scathing refutation of this remark.

Stress grew up in Le Panier, the historical center of the city which used to be home to the working class. The city of his childhood has vanished, and the area where he used to live has now been transformed into a village for tourists. We follow Stress in Marseilles as he tries to write the story of a bygone way of life, filled with days-at-the-beach, friends, soccer, marijuana and girls.

“Take a class picture from a school in the Panier thirty years ago and compare it with a picture of a class from the exact same school today and you’ll see. The Arabs and blacks are gone. Vanished. It feels like a whole ecosystem has been erased.”

Cinq dans tes yeux is the tale of a vanished community, of a man searching through the memories of his childhood in a neighborhood that has completely gentrified, and that has lost its soul in the process.

Bel’s Proustian madeleine is that of the language of the neighborhood: a unique mix of French and Arab words, of neologisms invented by his friends. Astoundingly creative, visual, and sharp, Bels ‘s slang resurrects the life of Le Panier and the colors of Marseille–as well as its rhythm and flavor; its music, humor, and verve.
As Baudelaire said, “La forme d’une ville change plus vite, hélas, que le cœur d’un mortel”. But as long as we have Adrien Bels’s prose: “Wesh! Vas-y, quoi, c’est bon !”