A Summer with Montaigne by Antoine Compagnon 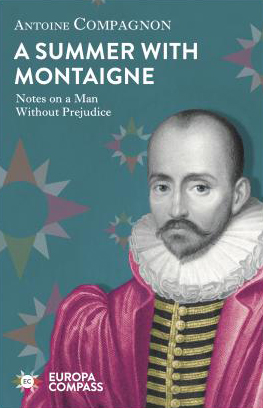 French writer Michel de Montaigne (1533-1592) is often considered the first modern man because of his “intense awareness of and passionate interest in the individuality of himself and of all other human beings,” as described by British writer Leonard Woolf.
When he turned 38, Michel de Montaigne retired from his position at the high court of Bordeaux and started writing his famous Essays, entirely devoted to the study of himself, which would bring him fame and immortality. Montaigne’s curiosity in studying the human psyche, and understanding of how to live in the face of death prompted the Renaissance in French humanities.
In the summer of 2012, French radio France Inter invited Antoine Compagnon to host a broadcast show every day for an entire summer on Montaigne. This experience led him to write A Summer with Montaigne, which explores in forty short and lively chapters what Montaigne has to tell us about how to think and live today. Compagnon invites us to a delightful and erudite stroll through Montaigne’s work and the –much needed – reminder that as long as there are people willing to consider carefully, observe passionately, and speak measuredly, there is hope.
A Summer with Montaigne by Antoine Compagnon, translated from the French by Tina Kover, Europa Editions