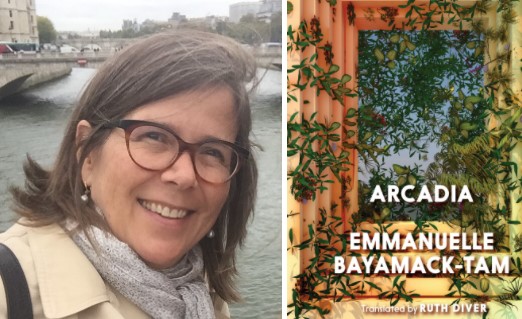 Ruth Diver was head of Comparative Literature at the University of Auckland until 2014. She is the author of Écrivains Russes, Enfants Français (Honoré Champion, 2013) and has published research on translingual literature. A bilingual translator French/English, she also translates from German and Russian. She won two 2018 French Voices Awards for her translations of Marx and the Doll by Maryam Madjidi, and Titus Did Not Love Berenice by Nathalie Azoulai. She also won Asymptote’s 2016 Close Approximations fiction prize for her translation of extracts of Maraudes, by Sophie Pujas.

Albertine Prize Committee: Why did you choose to translate this book?

Ruth Diver: This translation was a commission from Seven Stories Press. It was actually an emerging translator’s dream come true: they contacted me out of the blue (I think they found me through the French publisher – I had been pitching other books from P.O.L.), and asked for a sample translation to consider alongside several others. I read the book, loved it immediately, submitted my best effort, and they offered me the job. I thought Emmanuelle Bayamack-Tam had created a world and a set of characters and issues that felt very tangible, and I loved the rollicking plot and playful language – I was thrilled to have the challenge to render that in English, and to spend more time in that world.

A.P.C.: What did you absolutely want to keep and convey in this translation? Were there any specific segments you struggled with, things you were not able to keep in English?

R.D.: Arcadia is a first person coming of age narrative by a young person who has spent most of her life in an isolated community composed mostly of adults, and who loves reading and spending time in nature. It was a challenge to find just the right voice for Farah in English – something like a chatty colloquial tone, with snippets of high-register language, rare words, and citations from literary works, all of it with an engaging pace and rhythm too. I’d like to think I was able to keep most of that.

A.P.C.: What did you find the most challenging in translating this book?

R.D.: Those literary citations were a challenge. The author gives a list of all the authors at the back of the book – over seventy of them! Tracking down each one, finding the accepted translation if there was one, or the English original in some cases, working them into the text so they would be recognizable to anyone who knew them, but without them sticking out incongruously, all that was a delightful puzzle. And then there were the usual brainteasers of what to do with French slang, or impossible puns. But the joyous tone of the book made all those challenges seem fun.

A.P.C.: How was the editing process with the author and publisher?

R.D.: I was lucky enough to meet the author before I submitted the final manuscript of my translation to the editor. It was wonderful to be able to discuss her book with her, and she was very helpful in tracking down the last few citations I had missed, and in answering any questions I had. One example comes to mind: the character or the mother in the original of Arcadia is named Bichette, a term of endearment that literally means little doe, but has quite different connotations when said out loud in English. The author told me that she had seen it as a nickname for Elizabeth, although this appears nowhere in the book, so with her approval I changed it to Birdie, another cute animal name which has the same affectionate, slightly deprecating effect.
The editing process is always one of my favorite phases of working on a translation: it’s when you get detailed feedback on all your thousands of choices. Elisa Taber at Seven Stories was meticulous and so very helpful and positive that our many exchanges of emails and versions were a real pleasure.

A.P.C.: Do you find important that the translator takes liberties with the text while translating a book? If yes, what kind of liberties?

R.D.: Literary translation is about so much more than conveying the meaning of the original. It’s about replicating the effect that the text has on the reader, its emotional impact, the mood it creates, which often has a lot to do with the musicality of the writing. So any liberties I might take are usually to achieve that goal – in this case, to give readers the same joy in spending time in Arcadia as the French readers of Arcadie.

Arcadia, a novel by Emmanuelle Bayamack-Tam, tr. by Ruth Diver, Seven Stories Press, published in France by P.O.L.
Click here to purchase that book with us.