4 French Novels on The Workplace

This fall, a handful of French novelists tackle head-on the changes affecting the workplace in France, from the consequences of globalization on factories (Flahaut’s Nuits d’été) to an exploration of what working in a factory does to your body and mind (Ponthus’s À la ligne), to the boom of cultural institutions (Levi’s La Tannerie) to the privatization of some landmark public companies (Lucbert’s Personne ne sort les fusils). As Manny Fernandez wrote recently in the New York Times, a job is “a paycheck, an identity, a civic stabilizer, a future builder.” Here’s Thomas Flahaut, Joseph Ponthus, Celia Levi and Sandra Lucbert’s take on how its transformation directly affects our lives. 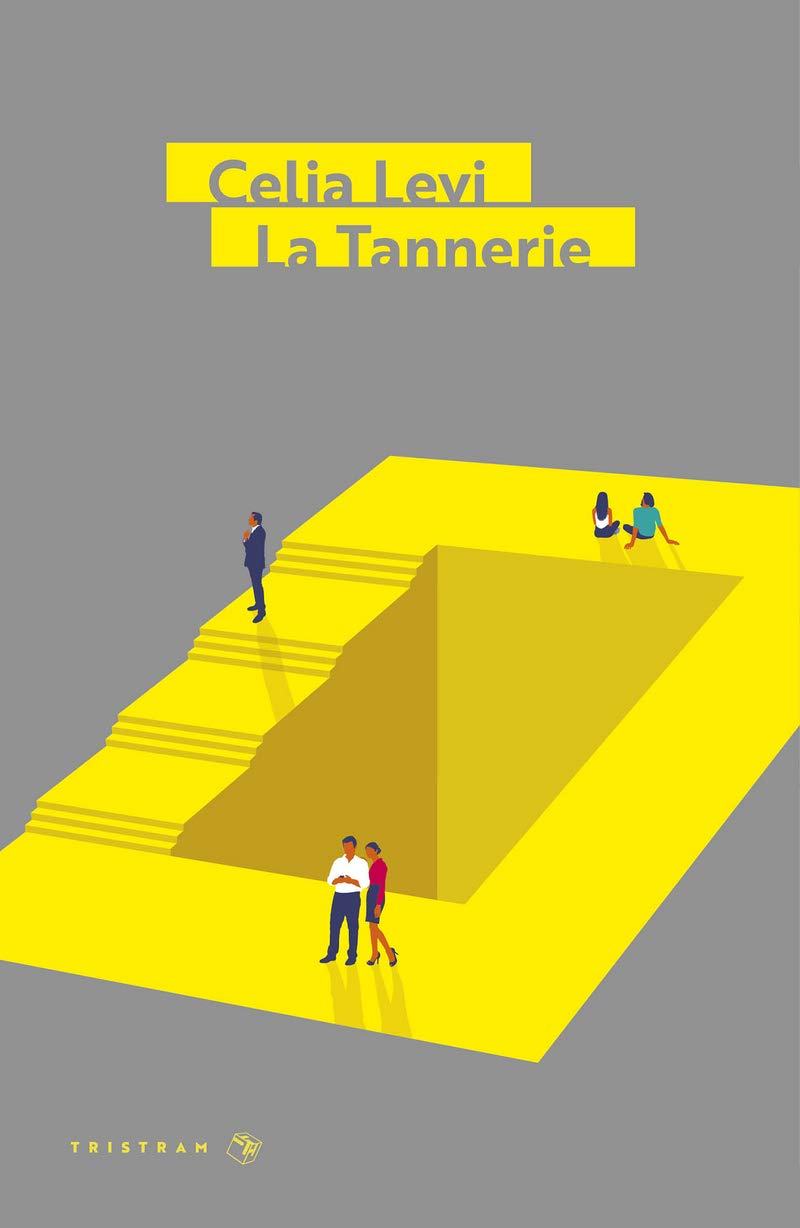 Like many young people who come from small towns, Jeanne, after receiving her diploma in modern literature, comes to settle in Paris in hopes of landing a job in cultural affairs. After a disappointing first experience in a bookstore, Jeanne was hired as a receptionist at La Tannerie, a new cultural scene emblematically situated in Pantin, a former working-class district of the capital now in full gentrification mode, with the mission of resurrecting the age-old dream of the left: to educate the masses, arrange meetings, and reinforce social ties (the slogan of La Tannerie being “Connection is the crux”).

Jeanne, who dreams of belonging to this wealthy Parisian youth, so elegantly casual no matter the occasion, is dazzled by the microcosm that is La Tannerie. From cashiers to receptionists, from programming officers to managers, every member of this little world expresses themselves fluidly, shares the same socio-cultural references, dresses with simplicity and discernment, and masters the same social codes.

Jeanne’s efforts to integrate herself into this society are not unlike some of the greatest bildungsromans of the 19th century, particularly Sentimental Education (see the brilliant review by Ch. Marcandier Bry). Just like Frédéric Moraux, Jeanne progresses through a world of images, follows mere illusions, and will come to experience bitter disillusionment. Like her illustrious predecessor, Celia Levi describes with fierce thoroughness the emptiness of the employee’s political speeches, the managerial discourse of those in charge.

A stunning coming-of-age novel, La Tannerie is also a wonderfully accurate portrait of our cultural world, of the vacuity of its language, of the duplicity of its political positioning; a great novel about youth, the modern day, and its language. 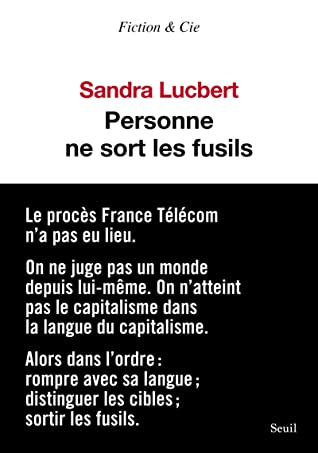 In the spring of 2019, Sandra Lucbert attended the France Télécom-Orange trial. For 2 months, seven ex-directors of the company were on trial for having, in the mid-2000s, installed a “politics of destabilization,” with plans to reduce their workforce (with 22,000 fired and 10,000 relocated within 3 years). This was followed by, as a direct consequence, a slew of suicides.

As a writer, Lucbert invokes Kafka (In The Penal Colony) and Melville (Bartleby, The Scribner) as she relentlessly dismantles the language and inhuman logic of capitalism, the perversity of its methodology, and the managerial newspeak whose ultimate function is to tell a different story, to better conceal the massacre of our lives, our minds, and our bodies brought on by a deregulated, yet triumphant, capitalism.

And this language, Sandra Lucbert observes with dismay, is spoken by defendants, legal authorities, and victims alike. It is this invisible but common element that continues to serve the interests of the accused.

Personne ne sort les fusils is an optical tool that allows the reader to “see in prose” in Proust’s words. Lucbert’s intention is to “give eyes to our thinking” with “a combination of words whose effect will be similar to a projector, glasses or magnifying lens.” The laws that structure our society can be seen everywhere and are being spoken everywhere. 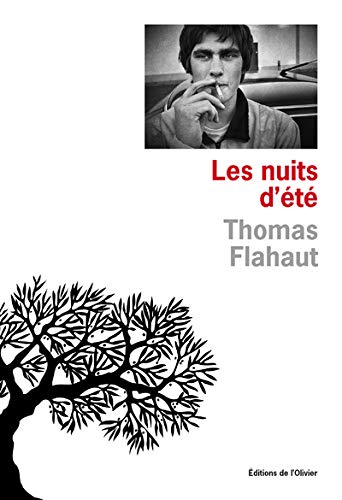 Thomas, originally from the Franche Comté region of France, has just failed, for the fourth time in a row, his first year of law school. How will he tell his parents? His father, above all, who has spent his whole life working the assembly line at the Lacombe factory—how can he tell him that his own son is about to follow in his footsteps?

Back in Switzerland, in Les Verrières where he grew up, Thomas is hired as a night worker in the Lacombe factory. There, he reunites with former classmates— one of whom is his childhood friend Medhi. Thus begins a new existence, his nights controlled by the infernal rhythm of the factory; his days disordered and strangely slow, strangely empty. Thomas gets farther and farther from other people every day, as he sinks into loneliness and depression.

Until the day his manager gathers the team and announces that the machines will be taken down and the workplace relocated. What begins then is a fight against time, against machines, in order to each prove their value as workers. A twilight fight in a world doomed to disappearance; a fight doomed to fail, but one that will birth the very notion of collectivity—as the workers hold out hope for the chance to get through it together.

Thomas Flahaut offers a sober and concise text on the final days of a working class, which the current moment repeats ad nauseam, “must be adapted.” Alongside Edouard Louis, Nicolas Mathieu, or even Arno Bertina, he maintains, with a precise touch and remarkable accuracy, the memory of this world, a testimony to a glory long past and doomed to decline.

Far from any romanticism, from any artifice, closer to the pain of deteriorating bodies, to the feelings of failure and shame, Flahaut shows us the violence concealed by the terms “relocation,” “optimization of means of production,” “increased profit margins” — and the devastation they cause in our lives. 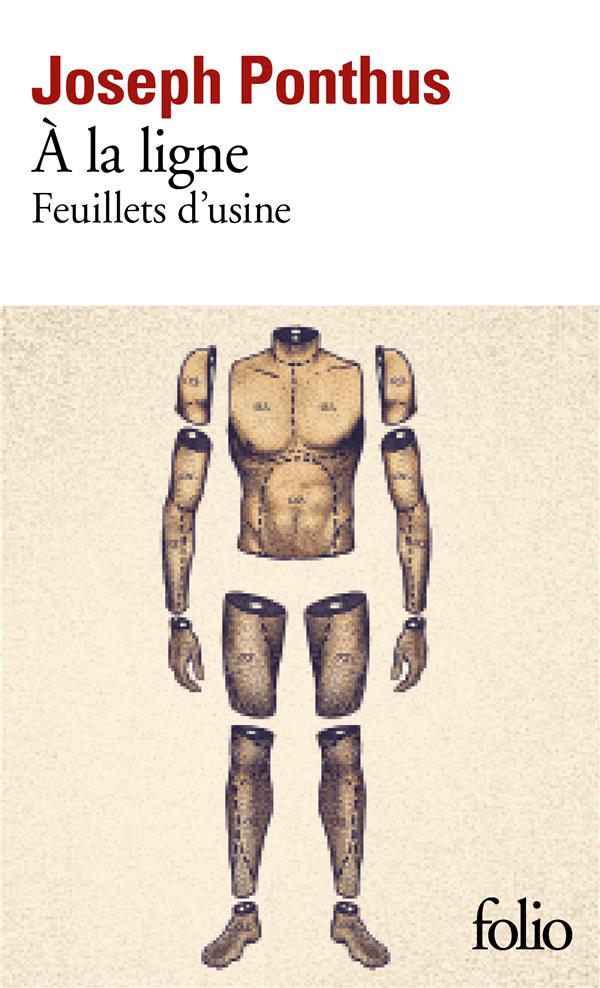 À la ligne: Feuillets d’usine is a collection of short and highly poetic reflections that Joseph Ponthus—an unemployed academic forced to work in a factory for a living—has while working in a fish factory and then a slaughterhouse. As he settles into the grinding, relentless, and crushing routine of being on the line—with its horrific hours, monotony, and degrading physical exhaustion—he makes subtle observations of the people around him: his bosses, his co-workers, and the people he sees during his time off. But as the weeks and months go by, Ponthus comes to the terrifying realization that the more time he spends at the factory, the more the factory invades his mind. Weekends become mere countdowns until Monday; and time spent with friends becomes a useless respite against the inevitable return to the line.

Interspersed with surprising references to poetry and art, this book is a clear-headed, remarkable, and highly personal account of what factory labor is like down to the smallest details. Its perspective on factories will make you reflect more on the food that you eat, the products you buy, and what happens behind the curtains of working life. Highly recommended.