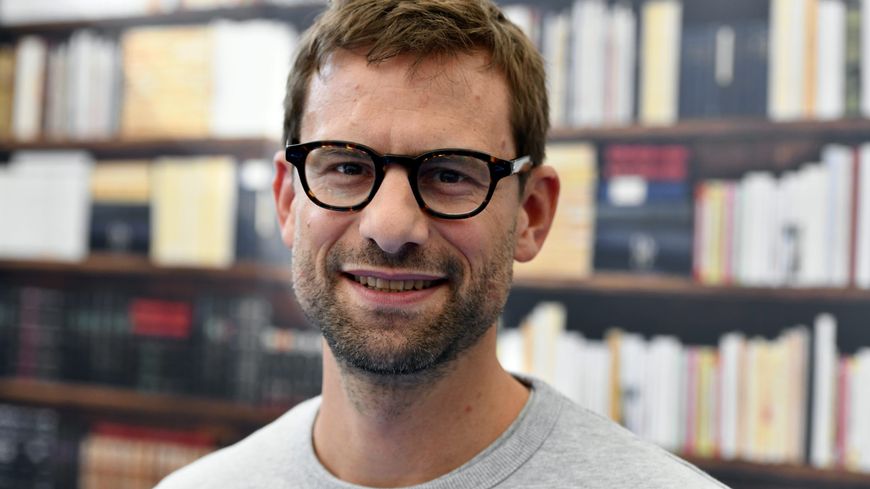 In a country that cherishes literary quarrels as much as France, a novel unanimously praised by the literary press from Le Figaro Littéraire, to Libération, including Télérama, Le Monde, and Les Inrocks is quite a rare thing. And Their Children after Them (tr. by William Rodarmor, Other Press). Nicolas Mathieu’s second novel, counts among these happy few.
And after a few pages into it, readers clearly understand why: Nicolas Mathieu’s talent is staggering. Mathieu writes with insight and authority about a world that he knows inside out, a world where men are crushed by factory work, where a woman’s beauty fades long before 30, where teenagers agonize in their boredom and from having no other prospects than repeating their parents’ failures. Just like Edouard Louis, Nicolas Mathieu is a legitimate heir to Pierre Bourdieu, Annie Ernaux, and Jean-Patrick Manchette. And Their Children after Them is one of those novels that expands your world, and we wanted to express our gratitude to Nicolas Mathieu to virtually sit with us and discuss his Goncourt-winning novel which is also a finalist in this year’s Albertine Prize.

Albertine Prize Committee: The plot of the book is situated in this in-between place, neither city nor countryside. It is a little-explored universe. A forgotten land. For good? This is also what your title seems to highlight in this loan, so to speak, from Sirach.

Nicolas Mathieu: It is clear that this France, of detached homes and mid-sized cities, of urban development zones and supermarkets, has long been in a sort of blind spot politically and artistically. Large cities, suburbs, and the countryside are more often represented in these domains. All of this is changing, I guess, notably because of the books that focus on them (Florence Aubenas, Annie Ernaux, etc.) and the Gilets Jaunes crisis. We see that this France, discreet until the present moment, is simultaneously the majority, sick, and angry.
But in saying that, I realize that I am probably getting a bit ahead of myself. Sociologists, demographers, geographers, and our literary specialists would surely demonstrate that this is not so true nor so new.
In any case, the France of the in-between is now a burning issue. As for the passage from Sirach that opens the novel (“There are some of whom there is no longer any memory, they have perished as if they never existed, as if they had never been born, and, likewise, their children after them”), he said something else: that history is made from the anonymous, that this fate repeats from one generation to another, that they are the cannon fodder of the centuries. And this was also a way to link the modest destinies that are important to me to a sort of mythical past. Showing the greatness of minuscule lives is not the least of my concerns.

A.P.C.: While the pandemic and the environmental crisis are pushing us to reconsider production, there is talk here and there about (re)industrialization and (re)localization of our economies. But are these goals still condemned to oblivion in your opinion?

N.M.: All of the proposed pledges at the height of a crisis are more or less destined to fade away once the crisis has passed, I imagine. But I hope that at least the most dazzling speeches on happy globalization, the specialization of nations, the apology of flow (?), zero stock, that this consent surrounding things and this faith in the naturalness of the evolutions at work will be put in their places (?). I recently saw Thierry Breton, European Commissioner for the Internal Market, reluctantly admit that yes, maybe we had gone a bit too far in the direction of deindustrialization. A sad truth.

A.P.C.: Having been born in the 1970s, did we still inherit the hope of our parents from the optimism of the 30 Glorious Years? Was the fall all the more brutal? What do your readers who are 20-30 years old have to say about it today compared with the previous generation?

N.M.: For me, I grew up with this same impression that our lot could only get better, even though unemployment was already a very present issue. In the 1990s, wage increases, and the progress of household appliances was still casting us in its benevolent shadow. And something broke at this moment. In the popular and middle classes, who are cheaply accused of not being open enough, there is this nostalgia of a golden age, the certitude that the times that lie ahead will be worse. And I think that this assessment is now shared by the younger generations who correctly see that their place in society has been reduced, the planet less habitable, crisis a permanent reality. And this has nothing to do with pessimism. The sterile opposition between optimism and pessimism does not allow us to understand what is at stake here—anxiety but also the will to live.

A.P.C.: Frontal, or insidious, racism is described in your book in all its violence and absurdity. Could you tell us a bit about the tensions you wanted to document in your book?

N.M.: First of all, I wanted to be a novelist, not an activist (although you can be both). So, my idea was not to “denounce” racism. I remember my first university history class on fascism. In the introduction, our professor told us: “We’ll start with this: fascism is bad. Now, we can work.” In the same way, I try to not produce instructional literature but rather to convey reality, which is a political act in itself but more ambiguous. And if, in the novel, racism is indeed present in its absurdity and violence, it is also there as background noise, like a continuous buzzing. It is expressed by good guys, notably by Anthony’s father, for whom the Arab is the source of all evil, but who, at the same time, has friends from North Africa at the factory. The line between good and evil is not fixed among the characters. It shifts and fluctuates among them.
Creating characters, describing situations, staging human relationships, in short, making fiction, serves to do just that: it humanizes them rather than passes judgement against them. And of course, this approach never justifies racism.
Similarly, I believe that this book outlines other social, physical, geographical, and sexual tensions, among others. In this way, it is political, not because it accuses or promotes, but because it describes.

A.P.C.: And their Children After Them has been translated into 19 languages, including in countries that had a similar experience related to deindustrialization but perhaps with a different timeline of decline. Have you been surprised or intrigued by the international reception of your book?

N.M.: I don’t have an exact idea of how the book has been received everywhere it was published. But what surprised me, and delighted me at the same time—because I had the impression that this small, ultra-local story was reaching something bigger than itself—was to see people in Italy, Germany, the UK, just about everywhere, tell me: these young people, this place, I know them.

A.P.C.: Through a victory at the World Cup, and this instance of quasi-harmony, everyone seems to have forgotten social decline, the “galley,” resentment. In your opinion, do other phenomena besides sports have this power?

N.M.: Distance, especially social distance, disappeared in this moment of national unity.
And yes, there are other events that can spark this type of reaction. I think of the Charlie Hebdo event in 2015. The 1944 Liberation also comes to mind. These are the instances when what we have in common, the feeling of unity (and not of living together!!), prevails over the obvious tensions that are woven into society and over the power relationships and conflict that are inherent to collective life. Any group can be caught in this friction, between the natural clash of antagonistic interest and the need for organized unity. This is the heartbeat of human communities.

A.P.C.: Let’s go back to the soundtrack of the book. Could you tell us what you wanted to communicate through the music? Did you previously write it with music?

N.M.: No, I don’t generally write with music.
I believe that the titles present in the book have at least two missions. First, they have a little “effet madeleine.” They are sensations that bring us back to memories that we could have of the 1990s. They are like a period soundtrack. And then, as far as the songs that open each summer are concerned, they also say something about the content of the different parts. (does “parties” refer to something specific or just parts?)

A.P.C.: The book was adapted for the stage and the audiovisual rights have been purchased. Have you contributed to or do you plan to contribute to this other form of writing?

N.M.: Yes, I have already done quite a few screenplays, a children’s album, different things. I really want to get back into it, since I just finished a big novel due out in February 2022.

And their Children after Them. a novel by Nicolas Mathieu, tr by William Rodarmor, Other Press, published in France by Actes Sud.
Click here to purchase that book with us.