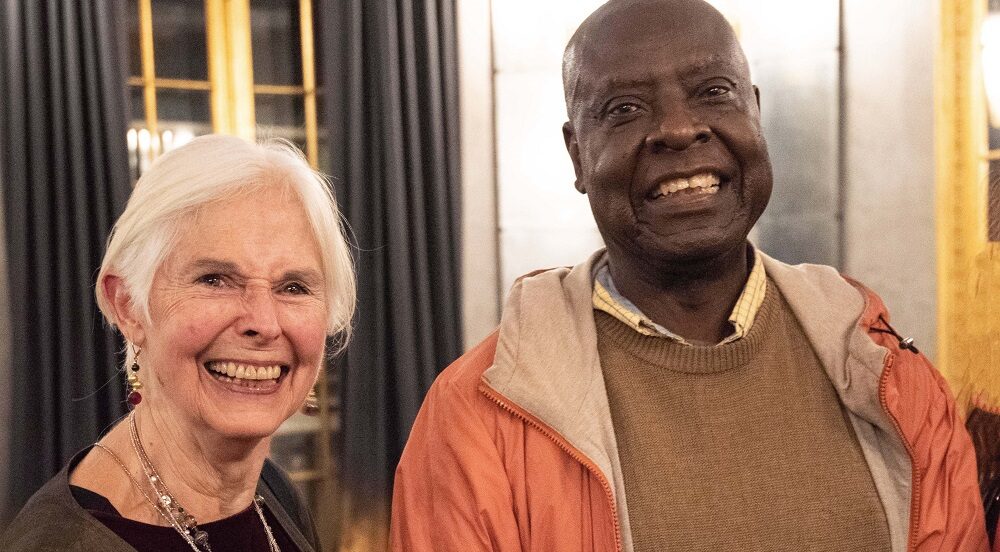 Marjolijn de Jager was born in Indonesia, raised in the Netherlands, and has been living in the US since 1958. She is a literary translator from French and Dutch to English, with a special interest in francophone African and Middle Eastern women writers. She has been awarded several NEH grants, a NEA translation grant, and is a Silver Winner of ForeWord Magazine’s Book of the Year Award (2007). She is retired from a 30-year career of teaching French language and literature, as well as literary translation at NYU, where she continues to teach Dutch and French language.

Albertine Prize Committee: Why did you choose to translate these two books?

Marjolijn de Jager: Both books were brought to my attention by Timothy Schaffner, the publisher of these two translations. I had done one earlier translation with him (For a Long Time, Afraid of the Night by Yasmine Ghata) and we found that we worked very well together. It was therefore a privilege and a great pleasure to be asked to take on first Emmanuel Dongala’s The Bridgetower Sonata, and a year later The Mediterranean Wall by Louis-Philippe Dalembert.

First of all, both are beautifully written books and for a translator there is no greater inspiration – and challenge – than beautiful writing.

Taking on the first project meant that through Dongala’s novel I could help bring a relatively unknown story to the attention of American readers. Even some professional musician friends, it turned out, were not aware of the brief but intense and important relationship of George Bridgetower and Beethoven or, for that matter, even of the existence of George Bridgetower. Furthermore, in addition to a wealth of fascinating historical figures, Dongala presents us with many different and still very current issues: class and racism among them.

In The Mediterranean Wall, Louis-Philippe Dalembert focuses on the plight of the refugee. For the past seven years I have co-facilitated a committee on Immigrants and Refugees at the Unitarian Church in Westport (CT) and tutored adult refugees in ESL through CIRI (CT Institute for Refugees and Immigrants). The subject is close to my heart.
The attempt at crossing the Mediterranean Sea has been going on for years now, and continues, despite the never-ending encounters with corrupt traffickers throughout the months-long journeys, only to be followed all too frequently by shipwrecks and drownings. Even if arriving alive on the European side, that is no guarantee for a warm welcome to a new homeland. Unless the world is made more aware of the fact that ‘refugees’ are not some faceless crowd but rather that they are individual human beings each with their own very urgent reasons for leaving home (‘No one leaves home unless home is the mouth of a shark,’ as Warsan Shire begins her poem “Home”) their future will always remain uncertain. And that is unforgivable.

A.P.C.: What did you absolutely want to keep and convey in these translations? Were there any specific segments you struggled with, things you were not able to keep in English?

M.D.J.: In these translations, as in every translation, it is imperative for me to adhere as much as possible to the tone and the music of the author’s voice. Since the music of French and of English differs greatly, I have to ‘transpose’ it, as it were. Reading the translation out loud to myself is not only helpful but a must. Colloquialisms often pose a problem, finding the closest equivalents in English idiomatic or slang usage. I don’t think there was anything that I did not keep in English.

A.P.C.: What did you find the most challenging in translating these books?

M.D.J.: Not only in these books, but in any novel, one of the most challenging aspects is remaining true to the author’s intentions as I interpret them or, as the great translator Gregory Rabassa said: “I have always maintained that translation is essentially the closest reading one can possibly give a text. The translator cannot ignore “lesser” words but must consider every jot and tittle.” He also compared the translator to a tightrope walker: too literal and you fall off the rope on one side, too creative and you fall off the rope on the other side. As far as I’m concerned this is true for every single translation. Translation never stops being a challenge and a great responsibility. To the author and to oneself. As V.Y Mudimbe told me after I finished the translation of his Le bel immonde (Before the Birth of the Moon in English): ‘The English version is your book.’ That is an enormous responsibility of which I try to always remain aware.

A.P.C.: How was the editing process with the authors and publisher, Schaffner Press?

M.D.J.: The authors, Emmanuel Dongala in particular, were extremely helpful in answering my questions and making occasional suggestions. Tim Schaffner always responds immediately to my queries and editing is a smooth process with him and his publishing house – in the end, it takes a team to produce a fine translation. We have built a very solid relationship. Such relationships often become life-long friendships, which over the years has been true as well for many of the authors whose work I have translated.

A.P.C.: Do you find it important that the translator takes liberties with the text while translating a book? If yes, what kind of liberties?

M.D.J.: I feel strongly that the translator really has no right to take liberties with any author’s text. It is an interpretation and that is personal enough: all one needs to do is compare several different translations of a same text to see that personal interpretations, without taking any liberties, often result in very different works and that is enough in and of itself. When I was teaching Literary Translation at NYU many years ago, I would end the course with a comparison of 13 different translations of Baudelaire’s poem ‘Au Lecteur’, which was always an eye-opening exercise!
If one wants to get really creative, one should perhaps write one’s own book.

The Bridgetower Sonata by Emmanuel Donagala, tr. by tr by Marjolijn de Jager, Schaffner Press, publisher in France by Actes Sud.
Click here to purchase this book with us.

The Mediterranean Wall, a novel by Louis-Philippe Dalembert, translated by Marjolijn de Jager, Schaffner Press, and published in France by Sabine Wespeiser.
Click here to purchase that book with us.