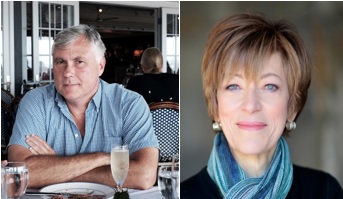 Join Justin Spring and Amanda Vaill as they discuss The Gourmands’ Way, Spring’s biography of six writers on food and wine whose lives and careers intersected in mid-twentieth-century France.

During the thirty-year boom in France following World War II—les Trente Glorieuses—Paris was not only the world’s most stylish tourist destination, it was also the world capital of gastronomic genius. Justin Spring and Amanda Vaill will bring back to life the story of A. J. Liebling, Alice B. Toklas, M.F.K. Fisher, Julia Child, Alexis Lichine, and Richard Olney, six American writer-adventurers having the time of their lives in the City of Light during this period and, in doing so, transforming the way Americans talk and think about food—and the way they eat.
Our speakers will lead us through both the fabled world of haute cuisine and the vibrant bohemian and artistic haunts of the Left Bank during the 1950s.

Justin Spring is the author of two previous biographies: Fairfield Porter: A Life in Art and Secret Historian: The Life and Times of Samuel Steward, the latter a finalist for the National Book Award. His writing on visual art includes monographs and museum catalogues, most recently Andy Warhol: Fame and Misfortune and Paul Cadmus: The Male Nude. He is a recipient of fellowships from the Guggenheim Foundation, the Leon Levy Center for Biography, and numerous universities.

Amanda Vaill is the author of the bestselling Everybody Was So Young: Gerald and Sara Murphy—A Lost Generation Love Story; Somewhere: The Life of Jerome Robbin. In addition to her screenplay for the Emmy– and Peabody Award–winning public television documentary Jerome Robbins: Something to Dance About, she has also written features and criticism for a range of journals from Allure to The Washington Post Book World.

In English. Free and open to the public, No RSVP necessary