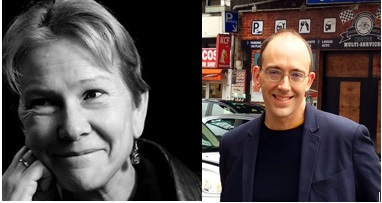 Join award-winning poets Cole Swensen and Jérôme Game as they read from their latest books in English and in French, and discuss the gift that bilingualism can be for their work and perceiving today’s world. Cole Swensen will read from On Walking On, a series of poems on the relationship between writing and walking. Jérôme Game will read from Salle d’embarquement, his debut novel, offering a peek into the twists and turns of globalization and how they can change a man.

In French and English. Free and open to the public. No RSVP necessary

Based in between Paris and New York City, Jérôme Game is a French author of 9 collections of poems, several CDs of sound poetry, a DVD of videopoems, and 6 volumes of essays.
Salle d’embarquement, his first novel, came out last fall (L’Attente, 2017). Also shown in exhibitions as visual/textual installations, his poetry explores the shapes and flows of contemporary experience via those of discourses, narratives and images. Often collaborating with musicians, stage directors, and visual artists for collective performances, he regularly gives public readings of his work in Europe, North Africa, Asia, and the Americas. Later this year Flip-Book & other poems, a volume of English translations of his work, will come out in London with Barque Press, and Ovni(s), the play he co-wrote, will premiere at the Avignon Festival in July 2018.
Read more about Jérôme Game on: www.jeromegame.com

Cole Swensen is the author of 17 books of poetry, most recently On Walking On (Nightboat, 2017) and Landscapes on a Train (Nightboat, 2015). Her books have won the Iowa Poetry Prize, the S.F. State Poetry Center Book Award, and the National Poetry Series and have been finalists for the National Book Award and the Los Angeles Times Book Award. A former Guggenheim fellow and co-editor of the Norton anthology American Hybrid, she is also a translator and has translated over 20 volumes of French poetry and creative prose. She divides her time between Paris and Providence, RI, where she teaches at Brown University.

In French and English. Free and open to the public. No RSVP necessary