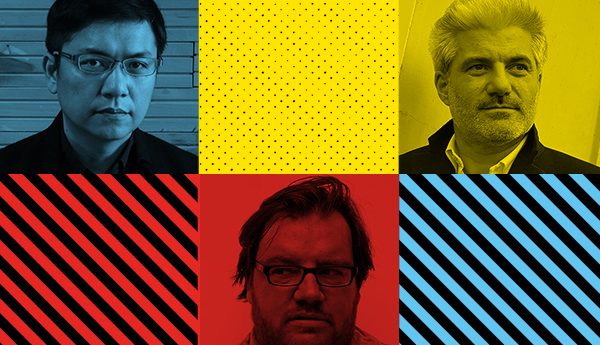 How do we endure the memories of war, from whose ravages neither people, animals, nor the earth itself can escape? How do we reclaim what is left after war has destroyed lives, communities, buildings, and landscapes? How do we rebuild ourselves in the wake of ignominious battlefield defeats?

Laurent Gaudé (Hear Our Defeats, trans. by Alison Anderson, Europa Editions), Sinan Antoon (The Book of Collateral Damage, trans by  Jonathan Wright, Yale University Press), and Wu Ming-yi (The Stolen Bicycle, trans by Darryl Sterk) have all written fiction that explores the wreckage brought by wars of all kinds, in all countries, in stories that echo with urgent philosophical questions. Join them for a riveting discussion of how civilizations and individuals recapture what bombs and bullets have stolen from us—and how literature illuminates humanity’s ongoing struggle to remember, reclaim, and rebuild. Moderated by Julian Borger, world affairs editor for The Guardian.

Hosted by Albertine Books and presented with The Guardian, the Cultural Services of the French Embassy, and the Taipei Cultural Center in New York.

Sinan Antoon is an Iraqi-born poet, novelist, scholar, translator, and an Associate Professor at New York University. He holds degrees from Baghdad, Georgetown, and Harvard, where he specialized in Arabic literature. His award-winning books include I`jaam, The Corpse Washer, The Baghdad Eucharist, and, most recently, The Book of Collateral Damage. His works have been translated to fourteen languages.

Julian Borger is The Guardian‘s world affairs editor. He was previously a correspondent in the US, the Middle East, Eastern Europe and the Balkans. His book on the pursuit and capture of the Balkan war criminals, The Butcher’s Trail, is published by Other Press.

Laurent Gaudé is a French novelist and playwright. After being nominated for the 2002 Prix Goncourt with The Death of King Tsongor, he won the award in 2004 for his novel The House of the Scorta. His novel Hell’s Gate, translated by Emily Boyce and Jane Aitken, was released in the US by Gallic Books in 2017, and Europa Editions published Hear our Defeats in a translation by Allison Anderson in 2019. In France, he has been awarded the Prix Jean Giono, Prix Goncourt des lycéens, and the Prix des libraries. He lives in Paris.

Wu Ming-yi, one of the most central figures in Asian literature, is the author of several literary works including collections of essays, short stories, and novels. Widely considered the leading writer of his generation, Wu is also an artist, designer, photographer, literary professor, and environmental activist, and his works have been translated into many languages including English, French, Turkish, Japanese, Korean, Czech, and Indonesian. His novel The Man with the Compound Eyes gained Wu international recognition, with major English and French translations appearing in 2013 and 2014. The Magician on the Skywalk was short-listed for the Prix Émile Guimet de littérature asiatique, and in 2018, The Stolen Bicycle was long-listed for the Man Booker International Prize.