Metamorphoses of The United States Since 1965

How can one measure the extent of the changes that have occurred in the United States over the course of the last half-century? How can one sort through all of the political trends and key moments? Is it possible to locate the foretelling signs as well as identify the repercussions of so many “profound upheavals” in the history of this country? Those are the questions that Maurin Picard will reflect on over the course of this evening, based on his conversations with ten key witnesses to the recent history of the US, Metamorphoses of The United States Since 1965 (Atelier Henry Dougier, 2016).

The effort might seem bold, but the goal of this book is to tell the story of the events–with the help of ten emblematic personalities–that have shaken up the United States since 1965. For each event there is a corresponding narrator of great cultural importance, someone who lived through and participated in these tipping points. Among these personalities is John Lewis, a key member of the civil rights movement and a great friend of Dr. Martin Luther King; Dan Rather, a former CBS journalist who spent one year as a correspondent in Vietnam; John Raines, a precursor of our contemporary “whistleblowers”, who brought Hoover’s illegal wiretap operations to the public eye in 1971; Sarah Weddington, who was a young and brilliant lawyer when she first pleaded in favor of the legalization of abortion before the Supreme Court; Leon Panetta, the former White House Budget Director, an ex-Republican who became a Democrat, struck by the pragmatism of the Reagan years; Leonard Kleinrock, one of the “college boys” behind the creation of the Internet; John Rizzo, Advocate General of the CIA and Jurist-in-Chief in the struggle against al-Qaida after the 2001 attacks; David Petraeus, who led the American forces in Iraq; and Patrick Egan, a professor at New York University and a specialist of the LGBT movement.

Maurin Picard has been a correspondent in the United States  for Le Figaro, Sud Ouest, and Le Soir since 2011. Born in 1973, he holds a degree in Political Science. He covered the 2012 presidential campaign for the francophone media and lives in New York.

Metamorphoses of The United States Since 1965, his first book, is published by Atelier Henry Dougier (2016). 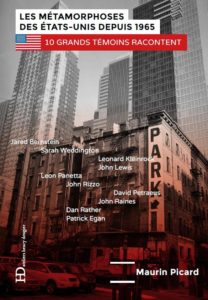