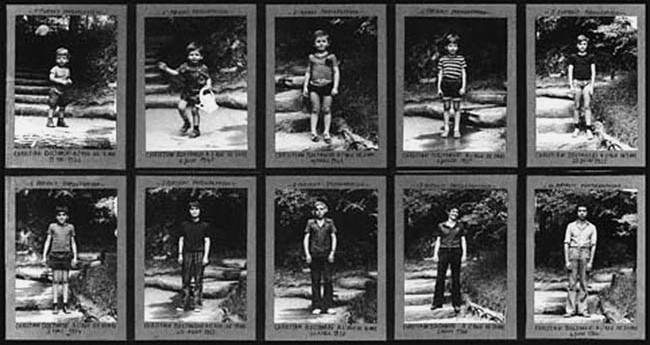 La Cache tells the story of an exceptional family, among its members Christian Boltanski–one of France’s most important contemporary artists– and Luc Boltanski, director of research at the prestigious EHESS and the inventor of “pragmatic sociology.”
The Boltanskis nourish themselves as if they are one body: at the restaurant, they share a three-course meal between the four of them. Luc and Christian, the children, don’t go to school. They never celebrate birthdays and the passing of time is never referenced. They all travel together in a Fiat 500, a yogurt cup-shaped car with no doors or back windows. When vacationing, they sleep on top of each other in the car. This behavior finds its origins in Etienne and Myriam’s histories. and the darkest hours of WWII.
At the heart of the book is a hole between the first and second floors of the Boltanski apartment where Etienne has lived from March 1942, til August 1944 – the darkest hours of WWII. This period of treachery and withdrawal informs the future of the entire Boltanski family. Myriam keeps her children at arm’s length–often quite literally–and any attempt at emancipation is considered a deep betrayal.
With humor and tenderness, Christophe Boltanski follows the joyful and traumatic travails of a one-of-a-kind family, both afraid and curious of everything.

In English. Free and open to the public. No RSVP necessary.
WATCH THIS EVENT LIVE ON MONDAY OCTOBER 3, 2016, AT 7PM.

Christophe Boltanski is a reporter for the French weekly Le Nouvel Observateur. His debut novel, La Cache, was awarded the prestigious femina Prize in 2015.

Violaine Huisman is the Director of Humanities at Brooklyn Academy of Music (B.A.M.). She oversaw the English-language publication of Autodafe, a literary journal edited by the International Parliament of Writers, at Seven Stories Press. As a literary agent, she was responsible for the publication of Gregoire Bouillier’s memoirs Report on Myself and The Mystery Guest, Marguerite Duras’ Wartime Writings, and other titles. Her translations have appeared in World Literature Today, The New York Times Magazine. She has She is an executive board member of Dalkey Archive Press and Archipelago Book